Lawson is in the north-eastern part of Belconnen, bounded by Ginninderra Drive and Baldwin Drive. Lawson south is Territory land and is currently vacant except for some electrical infrastructure. The northern part of Lawson, which is the site of the former Belconnen Naval Transmission Station, is owned by the Commonwealth Government and was not part of the Lawson planning study. 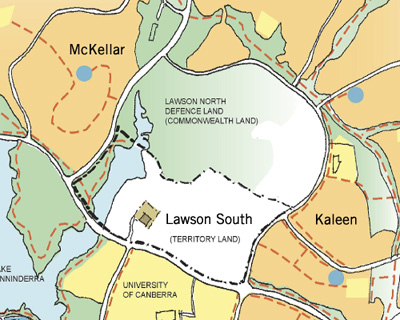 The vision for Lawson south is to achieve a liveable, sustainable ‘urban village’ that minimises impacts on the surrounding environment and maximises the positive attributes of the suburb. To achieve more sustainable development and residential choice, planning for Lawson south envisages a well connected, integrated and compact neighbourhood, where residential densities are higher than in surrounding established suburbs. Up to 1850 dwellngs are proposed.

Variation to the Territory Plan