Below is an indicative drawing that illustrates how the centre can grow and change over time. The community will be involved at each stage of development, either through consultation on changes to the Territory Plan, upgrades to the public realm or notification of development applications. 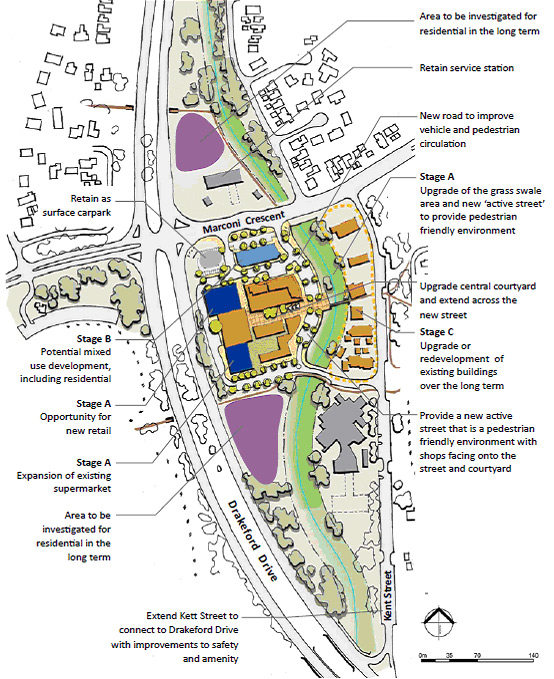 The community has been involved throughout the development of the master plan since March 2011, providing valuable feedback at stakeholder interviews, two drop-in sessions at the centre, community surveys, newsletters, emails and public meetings. The ACT Government received 98 formal submissions on the draft master plan including strong messages about protecting the village character of Kambah.

Information from stage one consultation was used to develop a vision, goals, design principles and preliminary ideas for the Kambah centre. These were tested during stage 2 of consultation.

Contact the Directorate for the consultation outcomes report for stage one.

Throughout March 2011, interviews were held with 17 key stakeholders with an interest in the future planning of the Kambah group centre.

A display at the Kambah group centre outside of Woolworths was held on Saturday 9 April 2011 between 11am and 2pm. At this participants were asked to comment on what does and does not work in the centre and what they would like to happen in the centre in the future.

The purpose of stage 2 was to seek feedback on a draft vision, goals, design principles and the draft design for the centre's master plan following on from stage 1 of consultation. An engagement report highlighting community feedback was prepared and is available for download.

A summary of the event held for stage 2 of consultation is described below.

A display at the Kambah group centre outside of Woolworths was held on Saturday 14 May 2011 between 11am and 2pm. At this display a draft vision, goals, design principles and master plan design were presented and feedback was sought. Members of the project attended the event to answer questions and receive feedback.

This feedback is being used to revise the draft vision, goals, design principles and master plan design so that the draft master plan can be presented back to the community during stage 3 of consultation.

Note: The draft design presented during Stage 2 is now undergoing substantial changes to layout. This is because concerns were raised about:

Stage 3 consultation included posting the draft master plan onto the project webpage for community comment. The draft master plan was available for comment over a six week period. The community were made aware of the release of the plan through email and adverts in the Canberra Times and Canberra Chronicle. Pamphlets were also sent to residents of Kambah.

Officers from EPSDD presented the draft master plan at the Tuggeranong Community Council meeting at The Burns Club on 19 September 2011.

The consultation period remained open until 14 October 2011. A total of 98 submissions were received on the draft master plan with strong messages to retain the village character of the centre, keep the centre accessible and convenient and improve the public realm.

What the community said:

Opportunities exist for the private sector to invest in the centre, which can help realise the community’s vision. A number of the changes proposed in the master plan are on sites already leased and change here may occur when it is appropriate and viable to redevelop.

The community will be involved at each stage of development, through consultation on changes to the Territory Plan, upgrades to the public realm and notification of development applications.

Where can I get the master plan?

The master plan is available to download at the top of this page or pick up a copy at the Erindale and Tuggeranong public libraries.