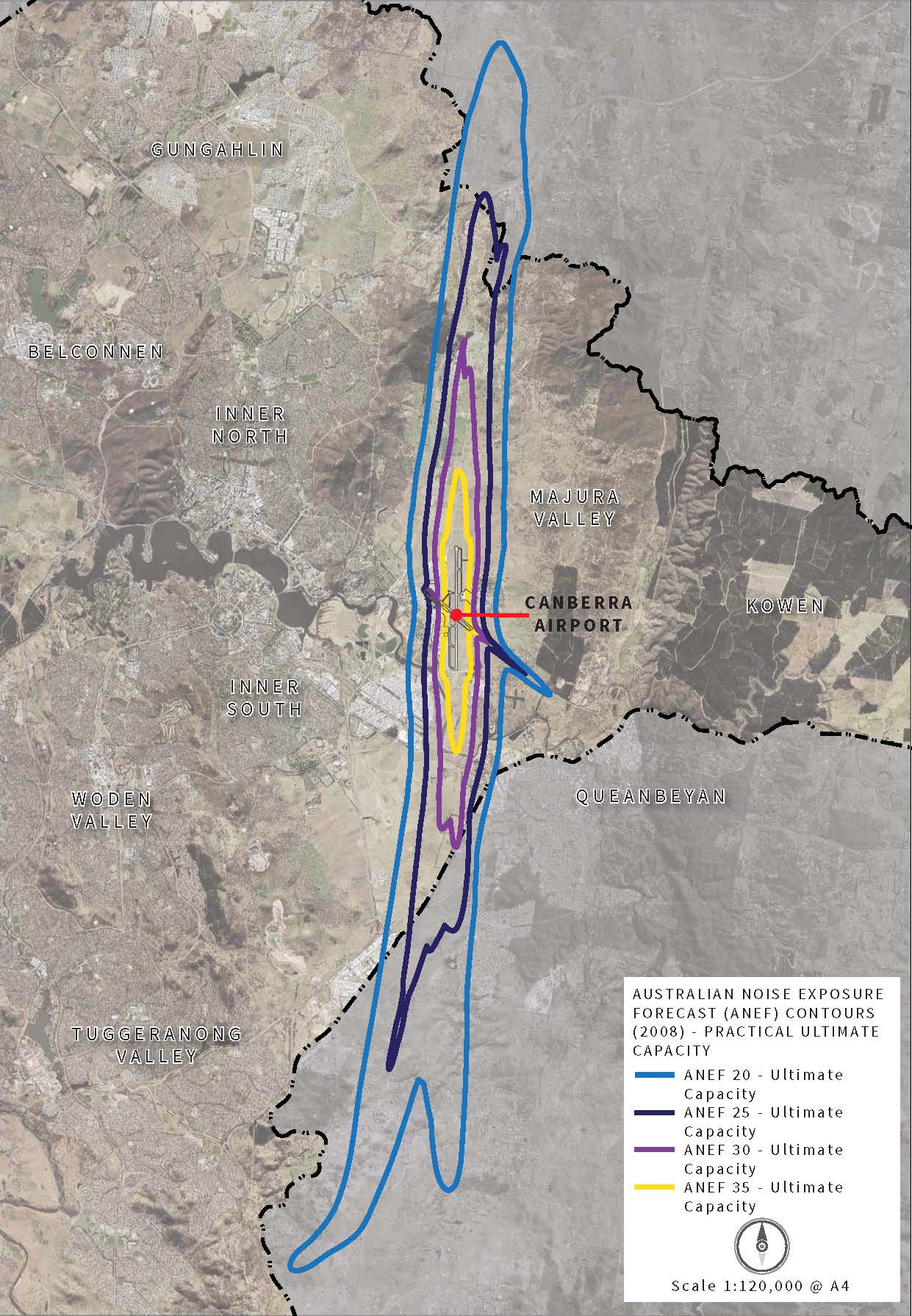 Canberra Airport is an important infrastructure asset for Canberra and the region, as well as a hub for business and economic growth. It is important to manage the use and development of land around the Airport in order to safeguard its safety, operational efficiency (and the substantial economic contribution to the Canberra region) whilst maintaining the amenity of surrounding areas.

The capacity of an airport to operate effectively is reliant on what occurs on the land surrounding it. Buildings, structures and even landscaping that physically intrude into flight paths can limit or prevent use of the airport. Residential development under flight paths can lead to complaints about aircraft noise and eventually lead to pressures for operational restrictions or curfews. Industrial development that generates smoke or plumes, or other activities such as agriculture, wetland developments or municipal waste depots may attract wildlife that present hazards to aviation.

Canberra Airport does not have the complex issues of other airports and the ACT’s strategic planning system and leasehold (land tenure) arrangements generally already protect Canberra Airport and its flight paths from sensitive land uses. Nevertheless, there is a need to manage risks to the airport through appropriate planning provisions.

It is also important to ensure that the community is aware of the potential impacts of aircraft operations (particularly aircraft noise) and that these considerations influence sound planning decisions to minimise effects on people and the Airport.

The Airport is required to prepare a 20 year Master Plan under Commonwealth legislation, and to update this Master Plan every five years. The Canberra Airport 2020 Master Plan (January 2020) presents the vision for Canberra Airport for the next 20 years. It foreshadows the Airport being internationally connected; a key hub for national air, rail and road transport; a major contributor to economic growth and a valued asset to the local community and region.

Unlike many Australian airports, Canberra Airport is curfew-free and therefore open 24 hours, providing significant capacity to facilitate growth in both international and domestic freight and passenger movements. The Master Plan envisages significant growth in passenger numbers from 2.8 million in 2013/14 to more than 9 million by 2040. It also envisages a significant increase in the role of the Airport as a freight hub, especially with the commencement of international flights. International flights will result in an increase in aircraft movements and will also include some night time operations.

The ACT Government has obtained aircraft noise exposure information from the Canberra Airport and this can be viewed on ACTmapi, the ACT Government's on-line interactive mapping service.

The map in ACTmapi shows the Australian Noise Exposure Forecast (ANEF) contours. The ANEF is a unit used to measure aircraft noise exposure. It provides a composite noise level usually averaged over a year, and is the key tool on which land use planning decisions related to aircraft noise are made in Australia. Recommendations relating to land use and development within ANEF contours are contained in Australian Standard AS2021-2015: Acoustics – Aircraft Noise Intrusion – Building Siting and Construction.

The ANEFs shown in ACTmapi are for practical ultimate capacity (when Canberra Airport is at its most busy in the future). In this regard they take account of international flights. The ANEF contours were endorsed for technical accuracy by Airservices Australia.

Further information about aircraft noise may be obtained from:

Protecting the role of the Canberra Airport

Airports are important national infrastructure assets that contribute significantly to the national economy, as well as to the economies of the cities, regions, States and Territories in which they are located. Airports need to be properly protected over the long term to realise these benefits and ensure their safe and efficient operation.

The National Airports Safeguarding Framework (NASF) is a national land use planning approach that is being implemented in planning systems across Australia to ensure that current and future operations of airports are protected in land use planning decisions. It provides guidance on planning requirements for development that affects aviation operations. NASF aims to:

NASF recognises that airports are important national infrastructure assets that contribute significantly to the national economy, as well as to the economies of the cities, regions, States and Territories in which they are located. Airports need to be properly protected over the long term to realise these benefits and ensure their safe and efficient operation.

NASF was prepared by the National Airports Safeguarding Advisory Group (NASAG) comprising representatives from State and Territory planning and transport officials, the Civil Aviation Safety Authority, Airservices Australia, the Department of Defence and the Australian Local Government Association. NASF was agreed to by Commonwealth, State and Territory transport ministers at the meeting of the Standing Council on Transport and Infrastructure (SCOTI) in May 2012.

NASF applies at all airports in Australia and affects planning and development around airports, including development activity that might penetrate operational airspace and/or affect navigational procedures for aircraft.

It consists of a set of guiding principles and six technical guidelines, with a further two guidelines in draft form. The guidelines contain information to help regulate and manage the various issues that can impact on airport operations and the amenity of surrounding communities. They include the following:

Further information on NASF, including copies of the above guidelines, can be obtained from the Department of Infrastructure, Transport, Regional Development and Communications.

It is the responsibility of each jurisdiction to incorporate NASF into their respective planning systems.

The ACT Government’s Environment, Planning and Sustainable Development Directorate (EPSDD) is working closely with Canberra Airport and the Commonwealth Government to consider how to implement NASF in the ACT context.

The proponent of a proposed land use change or development (e.g. rezoning, residential subdivision, telecommunications tower, multi-storey building) or of any activity (e.g. crane operation, emission of particulates or gases) which may impact the operation of Canberra Airport and its aircraft should notify the Airport in the first instance of the proposal. This enables parties to be aware of important airport safety requirements that could impact on the height, sitting and design of development and the types of activities that can occur. This notification should occur at the earliest opportunity in the development process, well before proposals are submitted to the planning authority for consideration.

Further information on planning and development around airports can be obtained from: