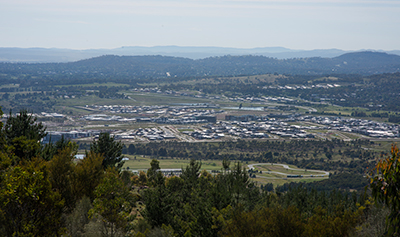 Molonglo Valley is the newest greenfield’s development front in the ACT, which, at capacity, is planned to accommodate approximately 55,000 new residents over the coming decades.

The Molonglo Valley is characterised by undulating, and in some places, very challenging natural topography for urban land development. The Valley and associated Molonglo River Corridor, however, present excellent opportunities to demonstrate best practice in ecological conservation, bushfire management, provision of local recreation facilities, and the incorporation of unique and distinctive landscape design features in the urban area.

The environmental attributes of the Molonglo River Corridor are recognised and protected under the Commonwealth Government’s Environment Protection and Biodiversity Conservation Act 1999, through the Molonglo Valley Strategic Assessment.

Land development in Molonglo Valley is planned in three stages:

A range of detailed investigations, policies and statutory documents have been completed to establish a framework for future development in the Molonglo Valley. These include:

One of the NES Plan commitments required that a planning and design framework be prepared to guide detailed planning and future development within Molonglo Stage 3, which comprises the suburb of Whitlam and two unnamed suburbs.

On 27 February 2019, the Molonglo Valley Stage 3 Planning and Design Framework was finalised. The framework is a high level strategic plan to guide future detailed planning and development within Stage 3 and includes:

The framework includes references to the Kama Interface Management Strategy (2016).

The suburb of Molonglo is proposed to be the principle commercial hub for the district of the Molonglo Valley.  The suburb will accommodate commercial, retail, residential and community facilities and will commence development in the coming years.

Planning and design is currently underway for the suburb and the immediate surrounding residential area of Denman Prospect (to the west of John Gorton Drive).  It is proposed that the suburb will accommodate between 7,000 and 9,000 people in a variety of housing options.  The vision is to create an innovative, sustainable, liveable, people friendly, active, connected, vibrant, urban village hub and destination.

The Coombs Estate Development Plan Development Application (DA No. 201120676) proposed by the Land Development Agency was conditionally approved by the planning and land authority in December 2011. The decision to approve the estate was appealed to the Australian Capital Territory Civil and Administrative Tribunal (ACAT) by the Conservation Council (ACT Region). Parties to the hearing agreed to file a consent order with ACAT in March 2012, following successful mediation in February 2012.

Part of the agreement is that future development applications for the area in north-east Coombs (see attached map) would not be lodged until such time as a Plan of Management that includes the river corridor adjacent to the suburb of Coombs was in place.

For information about the timing of land release in the Molonglo Valley and north Weston, contact the Land Development Agency or refer to the ACT Government's indicative residential land supply program, available from the Chief Minister's Department.

On 23 October 2019 the Legislative Assembly passed a resolution with two parts. Part 2 called on the ACT Government to commission an independent review of planning and development for the Molonglo Valley to examine if excellence in sustainable design is being achieved. In response to part 2 of the resolution, the consultant firm ARUP were engaged to undertake the independent review. ARUP’s review found that the Molonglo Valley has been successful in achieving a number of indicators of excellence in sustainable design, but there is also scope for improvement given this is a long term program. A number of recommendations have been included in the review and these recommendations are already being considered and incorporated in future planning and development. You can read ARUP’s independent review below.